As with other forms of art, fashion is highly contextual. Widen your understanding of current events by taking a look at trends of the past. By Adline A Ghani.

We live in a strange times. These days, a Muslim woman in a headscarf or veil can generate more controversy over what she’s wearing than, say, Lady Gaga. Whether you live in the East or the West, the fact remains that some people view the hijab as a symbol of subjugation and oppression. This, of course, contradicts a hijabi’s own perspective. She likely views the piece of cloth over her head or face as a form of liberation against objectification. We may be smack dab in the middle of the the information age, and technology may be bridging barriers and creating a global society, but when it comes to a Muslim woman’s idea of modesty, cultures and opinions can collide, often in an unflattering fashion.

That a simple piece of cloth can shape such strong opposing attitudes is bizarre. But that is precisely what can happen as soon as fabric acquires a third dimension on the human body. This is the reason, perhaps, that Islam outlines the principles of appropriate and modest dressing, and that its teachings have enhanced and refined the human disposition towards humility and politeness. One needs only to turn to the Qur’an to find guidelines on how Muslim women should dress. One such example is the Surah al-Ahzab verse 59, which states:

O Prophet, tell your wives and your daughters and the women of the believers to bring down over themselves [part] of their outer garments. That is more suitable that they will be known and not be abused. And ever is Allah Forgiving and Merciful. 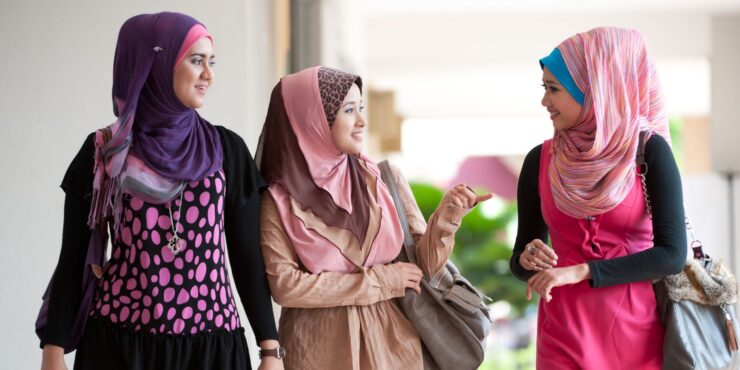 Geography and climate have always played an essential part in defining Muslim women’s fashions. This was certainly true in Central Asia where clothing needed to be robust to stand up to the elements, as well as to allow for horse riding and cross-legged sitting. In 19th century Central Asia, women typically teamed inner garments, such as a tunic and a pair of baggy trousers, with outer garments such as a robe, so they were able to move freely while staying covered. 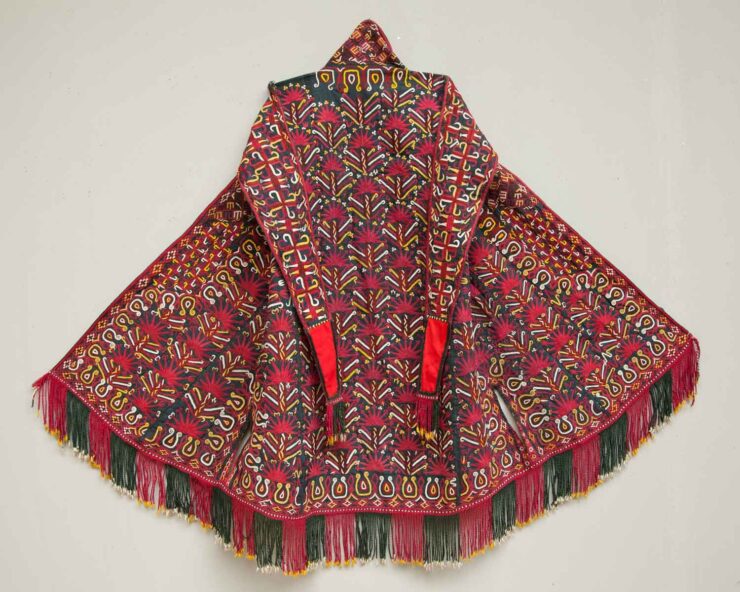 Many of the robes worn by Central Asian women during this time would have been decidedly feminine. Take for example the munisak robe, with its exaggerated bell-shaped hip design. Not only was it punctuated by the gathering of pleats on both sides of the waist, it was also made with a colourful and boldly-patterned silk fabric known as ikat. Worn by brides on their wedding day and widows during their periods of mourning, Central Asian robes were often made larger than their users, in order to accommodate layering . This was common practice, particularly during winter, when as many as 10 robes might have been worn as a show of wealth and to keep warm. To trap body heat, these robes were sometimes lightly padded and tailored with extra-long sleeves to cover the fingertips.

Another distinctive Central Asian outer garment meant solely for women was the paranja. This long, padded overcoat, worn pulled over the head, was an absolute requirement for women in the 19th century upon stepping out in public. It was often paired with a heavy horsehair veil that concealed the wearer’s face entirely. Though it looks oppressive and utterly strange by modern standards, its function was not so much to suppress women, but to protect them. Living in settlements along the arduous Silk Road, these women would have been exposed to a fair share of bandits, thugs and ruffians. Consequently, the ability to not draw their attention would have been most welcomed. Though the paranja may not look like much at first glance, a closer inspection would reveal the flair behind its design. Made without utilitarian armholes, it featured two faux sleeves that were tied together and draped over the back. The austere exterior conceals layers of colourful silk and satin underneath, the perfect example of how one should never judge a woman by her outer covering.

“When our sultans and kings embraced Islam, they encouraged their subjects to adopt more modest forms of dress”

The Baju Kurung and Baju Kebaya

As our own region demonstrates, the concept of modesty changes according to place and time. If you stepped into a time machine and travelled back a few hundred years before the advent of Islam in Southeast Asia, you would have found that many women in this region thought nothing of walking around in public bare-chested or clad only in sarongs worn as bodice wraps. When our sultans and kings embraced Islam, they encouraged their subjects to adopt more modest forms of dress. For women, this meant loose-fitting tunics and blouses, such as the baju kurung and baju kebaya, worn over sarongs.

While Muslim women of the Malay world would not have strictly adopted the hijab in the past, they did seek to shield themselves from both the blazing tropical sun and prying eyes by drawing a shawl or shroud over themselves when they stepped out of the home. In accordance with their appreciation of the Islamic faith, the Malays also developed a set of adat resam (social traditions) and pantang larang (prohibitions) concerning appropriate ways of dress. Among them are that clothing should not reveal aurat (parts of the body that should not be exposed according to Islam); clothing should not be transparent; neither should it be too form-fitting. 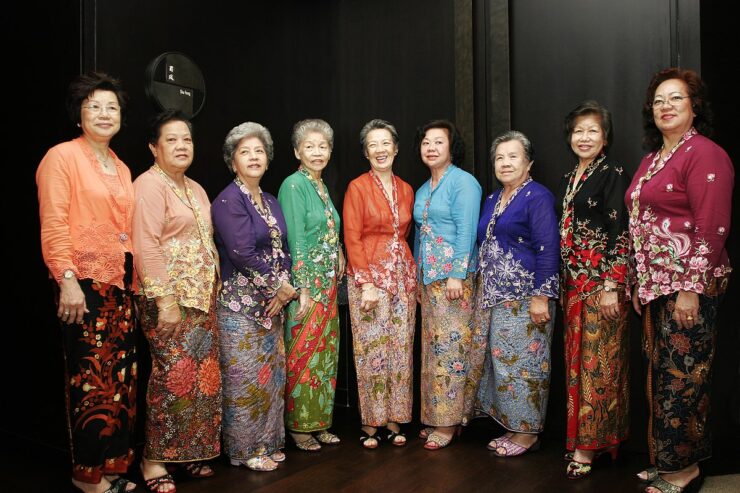 These guidelines may have been transmitted verbally through the ages and have come to be accepted as common knowledge within the Muslim Malay community.

Another rule that quietly governs the Muslim way of life is that, in Islam, a man’s clothes must not carry any resemblance to a woman’s. But there is, however, an item of clothing in Southeast Asia that, although simple in form, truly transcends barriers – the sarong.

The term sarong conjures up images of a cloth tucked or tied around the waist to form a skirt, which can be of various lengths, terminating anywhere from the knees to the ankles. The imagery may appear casual, but the unassuming sarong is an integral element of the traditional dress and social culture of Southeast Asia. Although the people in the region dress in a wide variety of ways, the sarong is the one single garment that unifies their style. Beyond visual aesthetics, garments like the baju kurung, baju kebaya and the sarong inadvertently reflect not only religious, but cultural beliefs. In turn, religious belief can influence the formation of cultural identity. 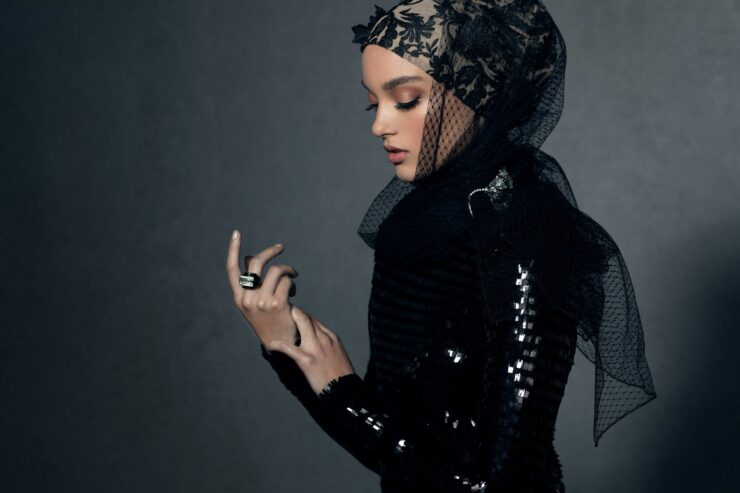 It is clear that modesty in Islam is nothing new and that Muslim women in Asia have long developed their own style. But it is distressing to learn that hijab-wearing Muslim women, especially those who live in the West, are misunderstood, discriminated against and viewed as threats. Islamophobia has exposed young hijabis to bullying, which erodes their self esteem, may send them into depression and could even cause them physical harm. Far from backing down, however, it seems that modern-day hijabis and hijabistas (fashion-forward hijab wearers) are taking the initiative. They now choose to express themselves through clothing, fashion and personal style, remaining modest while flouting criticism from naysayers and hardliners should it come their way. We can be proud that a great deal of these women hail from Southeast Asia.

With the rise of Muslim fashion blogs, hijabistas asserting their tastes, and Muslim women designers making their mark, Muslimahs nowadays have more fashion and style choices than ever before. The essential fact remains that a Muslim woman has the right to wear what she wants. For Muslim women who choose to cover themselves, the headscarf or veil has become a formidable accessory, making a statement that is personal, spiritual and fashionable.

The hijab obsession: moving on…

Reflections on Being Bicultural