Egyptian Yasmine Mahmoud, a 31-year-old executive secretary, rides her bicycle in Cairo on December 25, 2014. Women enjoy more freedom in Egypt than in deeply conservative Muslim countries such as Saudi Arabia, but the most populous Sunni Arab country still considers it inappropriate for them to ride bicycles. Unlike in many countries, the two-wheeler is considered unsafe for traveling in Cairo’s traffic-clogged roads. For Egyptian women, it is all the more challenging given the city’s notorious sexual violence, and female cyclists, in particular, are targeted by passers-by.

Yasmine Mahmoud cuts a defiant figure as she weaves her bicycle through the chaotic streets of Cairo, a place where few women dare to pedal.

Every day, like for the past four years, she takes her bicycle from her 10th-floor apartment and rides through the Egyptian capital, to the astonishment of bystanders.

“Unfortunately, it’s socially unacceptable in Egypt for a girl to ride a bicycle in the street,” said the 31-year-old executive secretary, as she prepared to set off from the upscale Cairo neighborhood where she lives.

Women enjoy more freedom in Egypt than in deeply conservative Muslim countrwomenies such as Saudi Arabia, but the most populous Sunni Arab country still considers it inappropriate for them to ride bicycles.

Unlike in many countries, the two-wheeler is considered unsafe for traveling in Cairo’s traffic-clogged roads.

For Egyptian women, it is all the more challenging given the city’s notorious sexual violence, and female cyclists, in particular, are targeted by passers-by.

The majority of cyclists in Egypt are working-class men, preferring two wheels for running daily errands.

Mahmoud’s family objected to her cycling initially but later started trusting her ability to cruise through the capital’s traffic bottlenecks.

“I used to ride a bicycle when I was a kid, either near the beach where we went for holidays or in sports clubs,” said Mahmoud, dressed in a yellow sweater and blue jeans, and wearing bicycle-shaped earrings.

“It took me a while to ride it again, but now it’s my daily companion.” 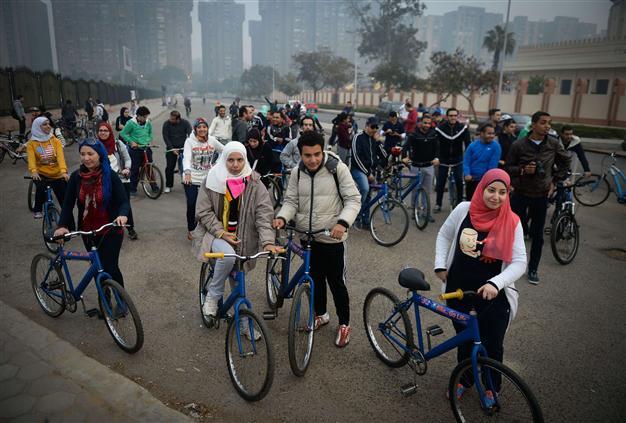 Mahmoud now refuses to drive her car unless she has to travel far.

“A bicycle saves both time and the money required for gas,” she said.

“This road would have taken at least half an hour,” she said, pointing to a queue of crawling cars at a roundabout, which she quickly passes on her bicycle.

Mahmoud said Egyptian streets should have separate lanes for cyclists given the risk of being mowed down by “scary” microbuses breezing past recklessly.

In addition to traffic hazards, “verbal sexual harassments and cynical passers-by are big problems too,” said Mahmoud, who still recalls how a young man once tried to forcefully jump behind her on her bicycle.

“I just ignore them and ride on,” she said laughing.

But this does not deter Mahmoud, who has taken her passion to a new level. She is a member of Go Bike, a group that promotes cycling.

Every Friday morning, the group arranges cycling tours. Many participants are women keen to learn the sport and wanting to follow Mahmoud.

“I am ready for the challenge,” said Shaimaa Ahmed, a veil-wearing 26-year-old pharmacist, as she brushed the dust from her clothes after falling off her bicycle minutes into her first attempt at cycling.

Fifty-year-old amateur Wafaa Ahmed is proof that cycling is not just for the young.

“The only fear is harassment, more than the chaotic traffic and lack of security on the streets,” said the mother-of-two, who wants to travel to her workplace by bicycle.

“But what we need are separate lanes for cyclists,” he said.

In July last year, Sisi took part in a cycling marathon to encourage people to switch from automobiles.  Although there is nothing wrong in choosing to drive automobiles especially when they are equipped with accessories that could keep one safe on the road (more info about that on ratedradardetector), people like Sisi are fighting for the freedom to have cycling as a ready option for everyone, especially for women.

“We want bicycles to be a means for Egyptian girls to break the molds of customs and traditions.”

For women still hesitating to ride on their own on the streets, Mahmoud has some words of advice.

“Try not to be scared. Forget those around you, challenge yourself and just enjoy,” she said, hopping onto her bicycle and pedaling off into Cairo’s busy streets.

What’s in a Name: Feminist Muslimahs