From George Lincoln Rockwell attending a Nation of Islam summit in 1961 to Bosnian Muslims having a prayer in 1943, these are extremely rare photos of Muslims in history you don’t really want to miss.

Rare photos from the Ottoman Empire

These rare pictures give an insight into life in Ottoman Istanbul more than a hundred years ago when the Ottoman Empire and the Islamic caliphate still existed.

Muslim members of the Waffen-SS 13th division at prayer during their training in Germany, 1943 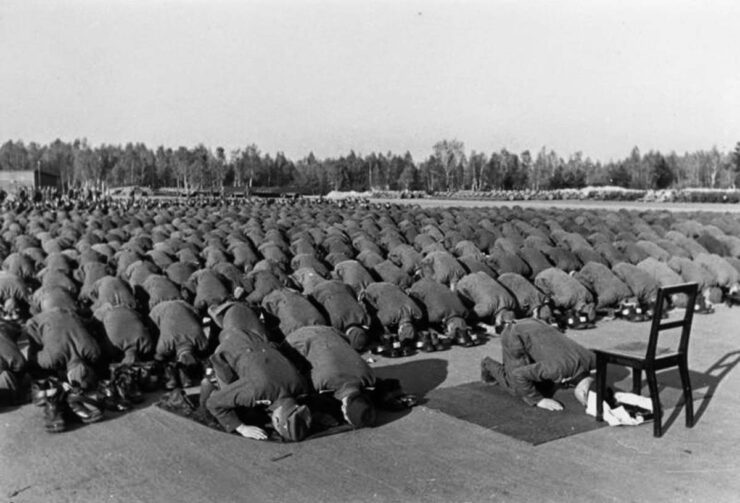 The photo is taken during the division training at Neuhammer. The romantic notions that Himmler had about the Bosnian Muslims were probably significant in the division’s genesis. He was personally fascinated by the Islamic faith and believed that Islam created fearless soldiers. He envisioned the creation of a Bosnian SS division constituted solely of Bosnian Muslims in a manner similar to the Bosnian divisions of the old Austro-Hungarian Empire.

Many of these soldiers came from Bosnia, and it was a conscious decision to fight the Communist Partisans and the nationalist Chetniks. The Nazis tried to cater to the Muslim religious needs of their recruits, but the soldiers themselves cared more about protecting their homeland (as promised by the Nazis), than anything else the SS and Himmler told them about racial equality/superiority to the inferior Jews. Riots and desertions were commonplace among the soldiers, often to the Communist Partisans led by Josip Broz Tito, who promised the soldiers amnesty if they joined the Partisans. The soldiers were only interested in protecting their homeland in Bosnia, so any incursions into Croatia or Serbia to help the Nazi allies or war effort there met with consternation among the soldiers, and even more desertions.

The 13th Waffen Mountain Division of the SS Handschar was a Muslim combat formation created by the Germans to restore order in Yugoslavia. It was given the title Handschar after a local fighting knife or sword carried by Turkish policemen during the centuries that the region was part of the Ottoman Empire. It was the first non-Germanic Waffen-SS division, and its formation marked the expansion of the Waffen-SS into a multi-ethnic military force. The division was composed mostly of Bosnian Muslims (ethnic Bosniaks) with some Catholic Croat soldiers and mostly German and Yugoslav Volksdeutsche (ethnic German) officers.

The division was initially sent to southern France for formation and training. On the night of 16/17 September 1943, while the 13th SS Division was training in France, a group of pro-Partisan soldiers led by Muslim and Catholic junior officers staged a mutiny. They captured most of the German personnel and executed five German officers. The mutineers believed that many of the enlisted men would join them and they could reach the western Allies. Soon the revolt was put down and as a result the division was moved to the Neuhammer training grounds in the Silesian region of Germany (present-day Poland) to complete its training. During the training phase, the German officers, pleased with its progress, coined the term Mujo for the Bosnian Muslims. The members of the division swore an oath of allegiance to both Adolf Hitler and Pavelić (Croatian leader). 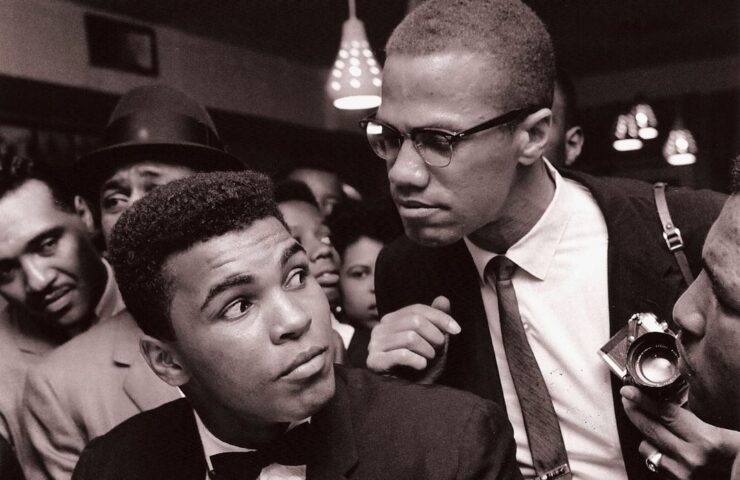 Muhammad Ali became a close associate to Malcolm X and he looked to Malcolm much as a mentor. They knew each other as active members of the Nation of Islam until Malcolm X left the group in 1964 and was killed in 1965 by NOI members. Ali didn’t leave the group until 1975. Ali and Malcolm were really good friends. Cassius even let Malcolm and his family stay with him for a couple weeks and have him front row seats before he fought Sonny Liston. However they did become estranged once Malcolm X had his falling out with Elijah Muhammad and Ali was still associated with Elijah.

But what did Malcolm X do for black rights in America as opposed to Martin Luther King Jr? Malcolm X was an extremely important figure in the civil rights movement. He went from working odd jobs to hustler, ended up in jail, converted to Islam because of his family, became a member of the Nation of Islam, became a leader (the second man after Elijah Muhammad), converting and opening new mosques, was way more ‘aggressive’ and confronting then the others (that’s why he was so successful as a ‘preacher’). In the beginning he was also very very fierce, actively calling on blacks to stand up and fight, wanted to create two nations, one for blacks, one for whites etc. After he went on a hajj pilgrimage he came in contact with the more realistic form of Islam, one that was not influenced by Elijah. So in the end he split and opened his own Muslim Mosque Inc., stopped talking about hate and about acceptance. He also went to Africa, saw what blacks could do and achieve, and actively lobbied with the then African nations against the US during the UN resolution/voting process.

George Lincoln Rockwell and members of the American Nazi Party attend a Nation of Islam summit, 1961 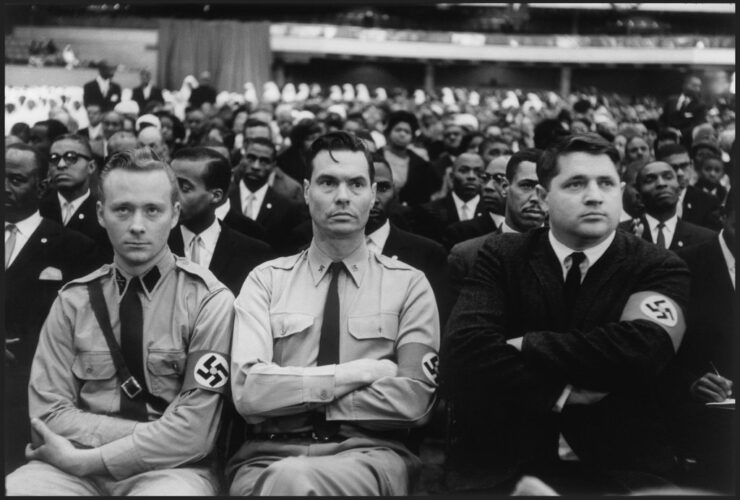 American Nazi Party Commander George Lincoln Rockwell, flanked by two members of the party, listening to Malcolm X’s speech at Black Muslims meeting held at the Uline Arena. This is amazing, very powerful shot. Not just from a historical point of view, but also photographically very strong, you can almost feel the tension. The guy on the left looks like he’s not overly happy to be present, whereas the guys on the middle and rightfully believe they’re in the right.

From its inception the ANP (American Nazi Party) had referred to African Americans as “niggers” and had affirmed the premise that they were mentally inferior to whites, but Rockwell became enchanted with the idea of a coalition; Nazis and Black Muslims could be allies, since they both sought the same goal—separation of the races.

On Sunday, June 25, 1961, Rockwell and ten troopers attended a Black Muslim rally at Uline Arena in Washington. They watched in awe as convoys of chartered buses unloaded hundreds of passengers outside the arena and the Muslim vendors made a killing on official souvenirs and literature. The Nazis were frisked at the door of the arena by several well-dressed but stern-looking Fruit of Islam guards—the Gestapo of the Nation of Islam. A special guard greeted Rockwell, said into his walkie-talkie that the “big man was coming now,” and escorted them to seats near the stage in the center, surrounded by eight thousand Black Muslims. They were encircled by black journalists, who wanted to know Rockwell’s thoughts. He told reporters he considered the Muslims “black Nazis.” “I am fully in concert with their program and I have the highest respect for Mr. Elijah Muhammad.” Rockwell pointed out his only disagreement with the Muslims was over territory. ‘‘They want a chunk of America and I prefer that they go to Africa.”

Russian soldiers, one of them wearing a WW2 German helmet, overlooking Grozny, 1999 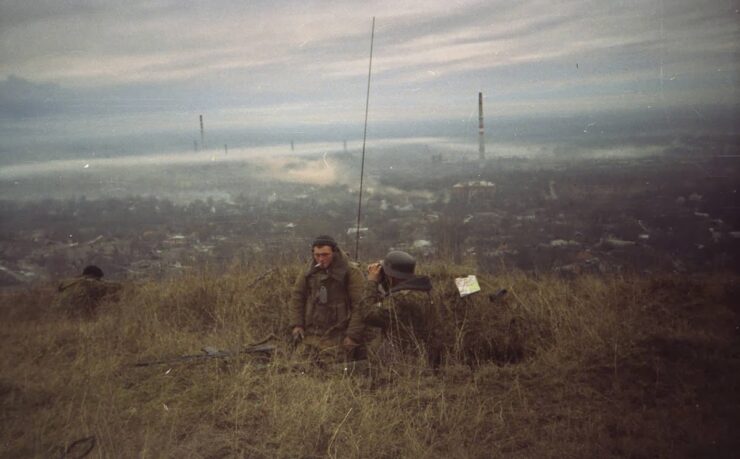 This is Second Chechen War, shot from Kirovo, near Grozny. They are not marines, just motorized infantry. About the helmet, the German Nazi helmet was seen as a talisman, as a good omen sign. These guys drab-olive gear and black “beanies” look just like what the inappropriately used Russian “Naval Infantry” (known as MorPekh) were wearing during the First Chechen. It’s “inappropriately used”, because MorPekh are meant to be used for amphibious landings and not in-land wars, but for the Chechen Wars, the Russians had to scramble every half-way combat-ready unit that they had.

In the summer of 1999 the warlord Shamil Basayev and his Arab friend Al Khattab, decided to invade the Russian Federal Republic of Dagestan from the neighboring, then-independent Chechnya, in order to create some kind of a trans-Caucasian Islamic Emirates Sharia state. They had some sympathizers among the locals and expected to be greeted as liberators, but most of the multi-ethnic, moderate Muslim people of Dagestan had actually armed themselves and fought back. The Islamists managed to capture some towns and villages, before the Russian military got there. There were up to 5,000 Chechen, Arab and other Islamic militants who participated in this invasion, which ended up triggering The Second Chechen War and Chechnya being brought back under Russian federal control. The Russian military was still in a pretty bad shape for that one, but they were better prepared and had learned most of their lessons. Several major Chechen warlords and their clans had switched sides, including the powerful clan of the current president of the Chechen Autonomous Republic, Ramzan Kadyrov.

Once upon a time in pre-Taliban Kabul days Afghan women had access to professional careers, university-level education, shops selling non-traditional clothing, public transportation, and public spaces, all of which they happily navigated freely and without supervision. 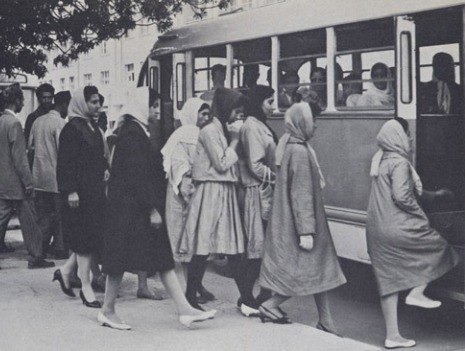 According to a State Department report from the Bureau of Democracy, Human Rights and Labor from 2001:

“Prior to the rise of the Taliban, women in Afghanistan were protected under law and increasingly afforded rights in Afghan society. Women received the right to vote in the 1920s; and as early as the 1960s, the Afghan constitution provided for equality for women. There was a mood of tolerance and openness as the country began moving toward democracy. Women were making important contributions to national development. In 1977, women comprised over 15% of Afghanistan’s highest legislative body. It is estimated that by the early 1990s, 70% of schoolteachers, 50% of government workers and university students, and 40% of doctors in Kabul were women. Afghan women had been active in humanitarian relief organizations until the Taliban imposed severe restrictions on their ability to work. These professional women provide a pool of talent and expertise that will be needed in the reconstruction of post-Taliban Afghanistan.”