The ancient capital of the Middle Kingdom, Beijing is a mindboggling mix of history and modernity, culture and architecture. By Laila Achmad.

Seek knowledge, even as far as China.’ Even then, Prophet Muhammad (peace be upon him) recognized China’s allure. As the political and cultural center of a rising superpower, Beijing is an obvious first choice to start to understand this vast country.

En route from Beijing Capital International Airport, I notice that almost all of the city’s older buildings are slowly being demolished to be replaced by new ones. This shows me just how constantly Beijing rejuvenates itself. Once we reach the city center, my jaw drops. I know Beijing’s skyline development is one of the most rapid in the world, but I did not expect a city with such a collection of skyscrapers in unique shapes and staggering sizes. We arrive at Niujie, an area of Xuanwu district, the so-called ‘Muslim Quarter’. There are about 10,000 Muslims residing here and it boasts facilities such as an Islamic school, a halal supermarket, and, of course, a mosque. 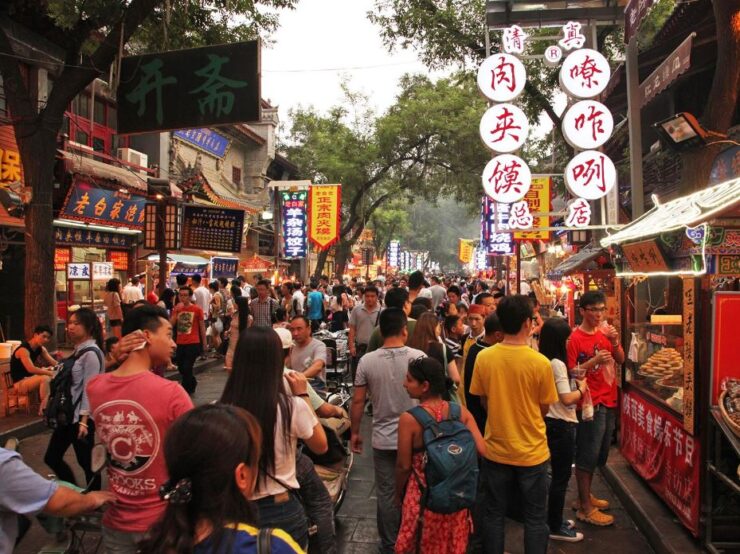 In fact, the Niujie Mosque is one of the oldest in Beijing. It was built in 996 and was expanded under the Qing Emperor Kangxi (1661–1722). It follows the traditional Chinese architectural style in both its façade and interior design, yet is adorned with Islamic decorations. Within the timber mosque are several important cultural relics. We continue on to Jin Sha Theatre for the world-famous Chinese acrobatic show. Acrobatic shows are very popular in China and have become a source of pride for the nation. An ancient art, Chinese acrobatics is said to have started during the Warring States period (475-221 BCE). Practically every province and major city has its own acrobatic troupe, and children are selected to be intensely trained as performers from a very young age. It is an amazing sight to behold.

Sunday It is said that if one has not climbed the Great Wall, one has not been to China. The Great Wall of China was originally built during the Ming Dynasty to protect the northern borders against intrusions. The entire Great Wall stretches for 6,259.6km, not including trenches, hills and rivers. There are eight sections with entry points for tourists. Badaling, Juyongguan and Mutianyu are the most popular ones. The Great Wall is not crowded at all today, and I take the chance to enjoy the majestic scenery in peace. I hike slowly for 4km before exhaustion stops me from clambering up any further. It is an unbelievably grand feeling taking in the spectacular view from my high vantage point. 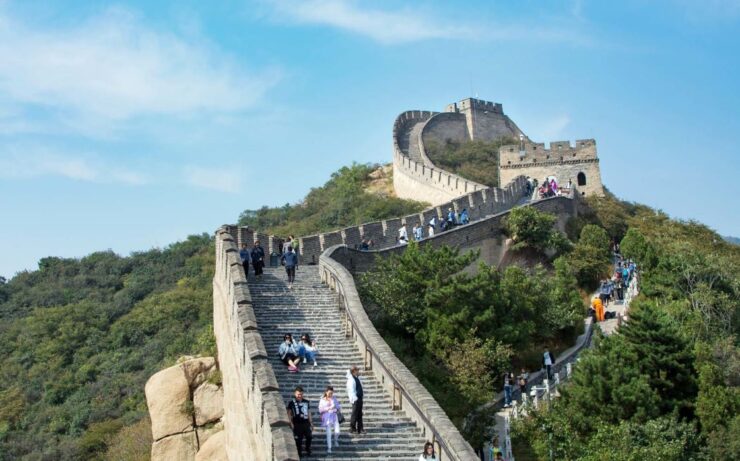 From the historic Great Wall, we move to the modern Wangfujing Street in Dongcheng district, one of Beijing’s most famous shopping streets. It is smack dab in the heart of the city and home to a number of large department stores, branded shops, and luxurious hotel chains.

After some window shopping, I wander to the end of the street and accidentally find a gem — the Wangfujing Night Market, or ‘snack street’. I enter the half-hidden alley to find a delightfully chaotic scene that would make heads spin. Bright red lanterns hang from above, sellers shout from behind their colorful food stalls, and overwhelmed tourists struggle to decide whether they should have the deep-fried impaled scorpions, millipedes or seahorses. Those who don’t have the guts can go for safer options such as the wonderful tanghulu, or candied fruit kebab.

The culinary delight is not over yet. For dinner, we are taken to a halal restaurant specializing in one of China’s national dishes, Peking Duck. Savoring the tasty duck wrapped in Mandarin pancakes, eaten with spring onions and Hoisin sauce, is ecstasy. 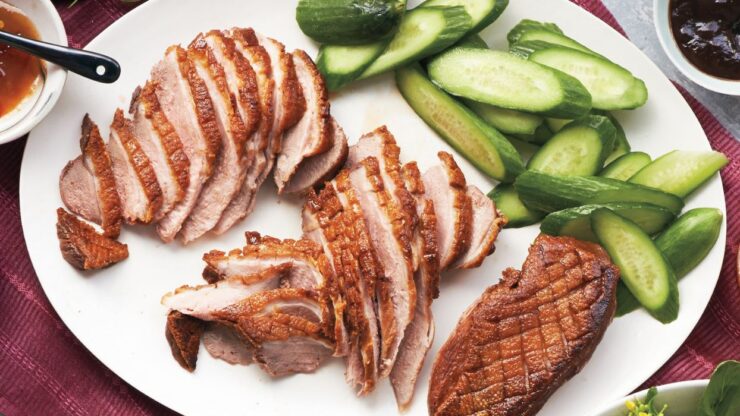 Monday The sun is shining brightly, the sky clear and blue, but the temperature has dropped to a single degree and freezing wind is blowing ruthlessly. Yet it does not stop our march to the Forbidden City. On our way, we pass Tiananmen Square. The world’s largest city square was the site of several important events in Chinese history, including the 1949 proclamation by Chairman Mao establishing the People’s Republic of China, and the 1989 pro-democracy student demonstrations and subsequent massacre by the People’s Liberation Army. The government continues to control the square tightly to this day. It is heavily monitored by surveillance cameras and obsessive guards who quickly muffle any signs of threat, including tourists in even vaguely political T-shirts. 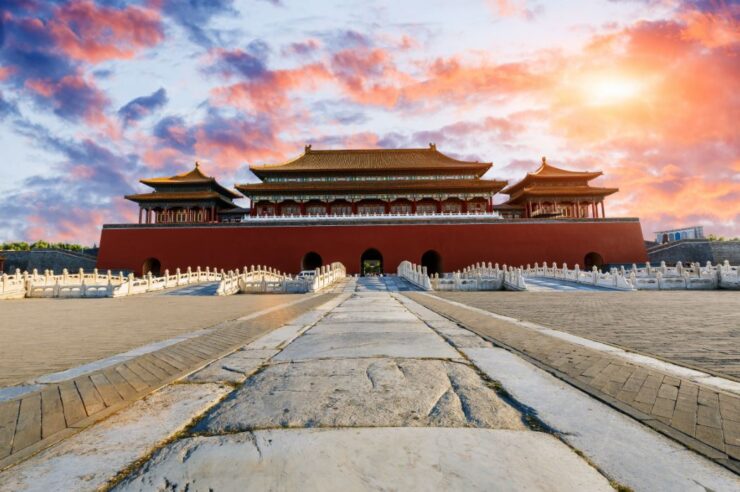 We continue trudging against the harsh wind towards the Forbidden City. Once I go through its massive gates and face the grandiose complex, the cold weather is suddenly forgotten. The incredible Forbidden City was the Chinese imperial palace from the Ming to Qing Dynasties and is exactly in the middle of Beijing. In fact, the complex’s central north-south axis remains the central axis of Beijing. For almost 500 years, it served as the home of emperors and their households, as well as a ceremonial and political center. As the name suggests, the complex was originally off-limits to commoners.

The only people living within the inner walls were the Emperor, his Empress, his concubines, and eunuchs — guards of the harem, castrated to ensure that only the Emperor could impregnate the royal ladies. Right before sunset, we head to the most intense place of the whole trip: Xiushui Market. Known in English as the Silk Market, Xiushui is a supersized shopping centre notorious for the counterfeit products among its merchandise. 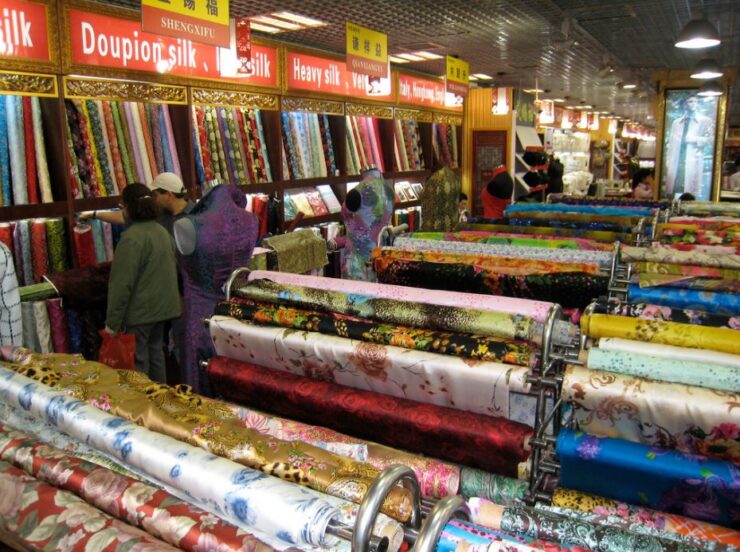 Each floor in the market is dedicated to different categories of products, from clothes to electronics. If you are short on shopping time, this is the only place you need to visit. But beware — the vendors are extremely pushy and will even grab you to make you stop and look. I start my shopping adventure on a bad note by making the mistake of just asking for the price of a pair of shoes. I bargain until I get the price I want, but since I do not actually have the intention to buy, I walk away. The vendor chases me down the hall and barks in my face, ‘If you don’t want to buy, then why did you bargain? You wasted my time!’ Not traumatized by the event, I haggle elsewhere for a suitcase.

The vendor opens the price at RMB1,500 (US$230). I repeatedly point out its flaws, persist with my price and the suitcase becomes mine for RMB200 (US$30). We close the transaction with friendly pats on the back and my mandatory line, ‘I will bring my friends to your shop!’ Xiushui Market can be overwhelming, especially with the shouting vendors and rude remarks. But if you know the game and hold your ground, you will triumphantly walk away with what you seek for the price you want. If not, hey — you still get an incomparable shopping experience!

On our final day, we visit a hutong nestled along unique old city lanes. Hidden behind tight alleys, hutongs are old neighborhoods that represent the real, authentic Beijing. Visitors usually tour hutongs on traditional rickshaws and that’s exactly what we do. Albeit short, ours is a pleasant rickshaw ride, passing by the Bell Tower, smiling at elderly men sitting in front of vintage cafés and watching the world go by. The experience is very charming. Our last stop is Beijing’s Olympic complex, known as Olympic Green, which holds eight venues of the 2008 Olympic Games with Beijing National Stadium (the ‘Bird’s Nest’ stadium) as the centerpiece. Together with the Beijing National Aquatics Centre (Water Cube), the buildings are achievements in modern architecture and have become Beijing’s latest iconic landmarks.

As I bid the great city farewell, my thoughts turn to the larger-than-life experience. To me, Beijing demonstrates its richness in all senses — history, tradition, culture and modernity, all in a balanced blend.

How Islam Can Make You Happy