What was promised to be a week of fun and friendship turns out, it appears, to be a scam.

Muslimah personalities, bloggers, designers, artists and fashion enthusiasts from all over the world arrived today in Hershey, Pennsylvania to attend International Muslimah Fashion Week (IMFW), which was supposed to kick off Thursday evening (local time) on March 20th.

But instead of being greeted with salaams and a warm welcome, they were told that the event was cancelled.

Omer J Mirza from Australian Islamic fashion label Acacia emailed Aquila Styleto say, “The IMFW has been cancelled before it was to be started. A lot of people have been affected, both ticket holders and vendors. Amidst all of this, police was called in by one of the vendors. People had been kicked out from their Hershey Lodge rooms. He added that the situation on the ground was a complete chaos.”

Dina Toki-O was among the dozens of fashion bloggers who arrived at the venue only to find out that the event appeared to be a scam. In an email to Aquila Style, Dina wrote: “Well, basically all of us bloggers who flew out were left stranded and now we’re in a kind person’s house until we can get to New York! Loads of designers and vendors were left robbed and stranded, too. Shea Bates pretty much ran away after the police spoke to her as they couldn’t do anything, anyway.” 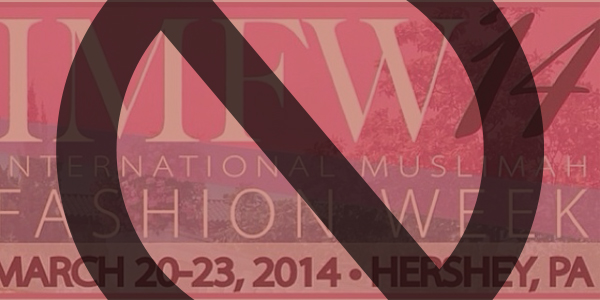 Dina, along with many other guests such as Maryam Alani who posted a video about her experience, had flown for hours only to get stranded at the Hershey Lodge, the venue where the event was supposed to take place.

The event was organised by a woman named Shea Bates, who allegedly has a criminal record. Her LinkedIn page claims that she is “Chief Operating Officer at Muslimah Conventions”. At the time of this report, IMFW’s Facebook, Twitter and Instagram have been taken down. Its website was still up at 12:45pm GMT +800 on Friday, March 21st.

“My dresses and all vendors dresses are with Shea and nowhere to be found,” says Omer. “I called the Hershey Lodge – and they said the person is not in and have left. I spoke to other people and they too said the same thing.”