A Muslim Shiite pilgrim carries a religious flag displaying Imam Hussein in Baghdad, on December 8, 2014, as they walk to Karbala for the Arbaeen religious festival. Arbaeen marks the 40th day after Ashura and commemorates the 7th-century killing of Prophet Mohammed’s grandson, Imam Hussein.

Iranian pilgrims are pouring across the border into Iraq in unprecedented numbers for this year’s Arbaeen.

General Ali Tamuz, the top Iraqi security official at Zurbattiyah border crossing, about 160 kilometers (100 miles) east of Baghdad, has many bruises and a couple of cracked ribs to show for it.

On Saturday, the handful of translators employed at the desert border had long been swallowed by the crowd and Tamuz only knew one word of Farsi to manage the flow: “beshin” (sit down).

“That achieved pretty good results until a colleague from the police came over to help,” he told AFP, laughing. 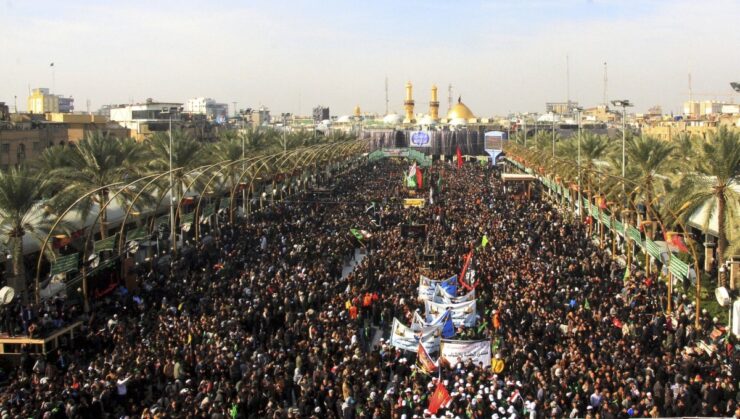 “He tried another word he thought he knew but it means ‘come’. When the pilgrims heard that, they all stood up, the fence was broken and things got crazy.”

The annual pilgrimage to Karbala for Arbaeen, which marks the end of the 40-day period of mourning for the revered Shiite figure of Imam Hussein, is consistently one of the world’s largest religious gatherings.

In addition to the millions of Shiite devotees who flock to Karbala, some of them on foot, from across Iraq, a large contingent of Iranians traditionally make the trip.

Buses usually ferry them across eastern Iraq to Karbala. This year the number of Iranians on their way to the place where Hussein was killed in battle and beheaded in 680 AD has doubled.

The fact that Iraq waived visa requirements for the duration of the religious event, which culminates on December 13, has made the pilgrimage more affordable.

But more than the 80-dollar saving, Khamenei’s call to take part in the commemoration as a means of defying the Islamic State (ISIS) group appears to have been the main trigger.

Hussein Rahimi, a resident of Iran’s Kerman province who had just crossed the border into Iraq, had no visa in his passport but a Khamenei sticker on the back cover.

“We want to convey the message that we will always obey the marjaiya (Shiite religious leadership) and that we are ready to fight the terrorists right here and right now,” Rahimi said.

Iraqi security chiefs see the presence of millions of Shiite faithful trekking across the country on open roads as a red flag to the Sunni extremist ISIS and its seemingly endless supply of suicide bombers.

However, recent battlefield victories against the jihadists, notably in the Jurf al-Sakhr area south of Baghdad, have helped clear a corridor for the pilgrims.

Wearing a green headband inscribed with the words “Labaik ya Hussein” (We are here at your service, Hussein), pilgrim Ali Akbar Ridhaie put in simply: “We came to show our presence here in Iraq.”

Iran’s involvement in Iraq was once somewhat of a taboo but in recent weeks, the key role played by Tehran in the anti-jihadist military effort has become more open.

Said Ohadi, who heads Iran’s body in charge of organizing pilgrimages, said on the country’s official IRNA news agency that “so far more than 750,000 Iranian pilgrims have entered Iraq.”

The deputy governor of Iraq’s border province of Wasit, Adel al-Zargani, said he expected the total to reach one million this year.

Foreign Minister Mohammad Javad Zarif said after a meeting in Tehran with his Iraqi counterpart Ibrahim al-Jaafari: “These pilgrims’ entry… is a symbol of the cooperation and union between our two countries.”