NEW YORK CITY, July 12, 2013 (AFP) – Pakistan teenager Malala Yousafzai vowed Friday not to be silenced by terrorists in a powerful speech to the United Nations on her first public appearance since being shot by the Taliban.

“They thought that the bullet would silence us, but they failed,” Malala said on her 16th birthday in a presentation in which she called for books and pens to be used as weapons.

“The terrorists thought that they would change my aims and stop my ambitions, but nothing changed in my life, except this: weakness, fear and hopelessness died. Strength, power and courage were born,” she said.

Her 20-minute speech was given several standing ovations and was quickly hailed for her message of peace.

Malala, who wore a pink headscarf and a shawl that belonged to assassinated Pakistan leader Benazir Bhutto, insisted she did not want “personal revenge” against the Taliban gunman who shot her on a bus in Pakistan’s Swat Valley on October 12 last year.

“I want education for the sons and daughters of the Taliban and all the terrorists and extremists. I do not even hate the Talib who shot me. Even if there is a gun in my hand and he stands in front of me I would not shoot him.”

“Let us pick up our books and pens. They are our most powerful weapons. One child, one teacher, one pen and one book can change the world. Education is the only solution,” she said.

The passionate advocate for girls education was shot in the head by a Taliban gunman as she rode on a school bus near her home in Pakistan’s Swat Valley in October.

She was given life-saving treatment in Britain where she now lives, but the attack has given new life to her campaign for greater educational opportunities for girls.

Malala is now considered a leading contender for the Nobel Peace Prize. The Taliban have made it clear however that she remains a target. 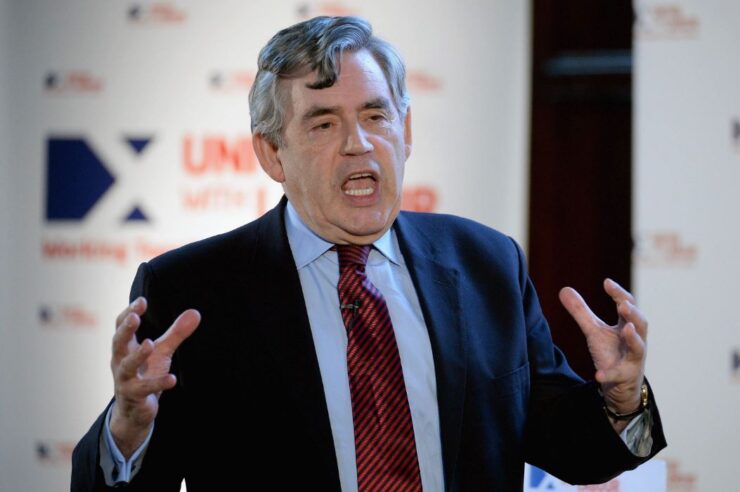 Gordon Brown, the former British prime minister and UN special envoy for education, hailed Malala as “the bravest girl in the world” as he presented her at the UN Youth Assembly.

Brown said it was “a miracle” that Malala had recovered to be present at the meeting.

The speech in which Malala invoked the legacy of Martin Luther King, Nelson Mandela and other legendary peace advocates brought quick to praise.

Malala also thanked British doctors and nurses for the care they had given and the United Arab Emirates government for paying for her treatment.

“I cannot believe how much love people have shown me. I have received thousands of good wish cards and gifts from all over the world. Thank you to all of them. Thank you to the children whose innocent words encouraged me,” she said. 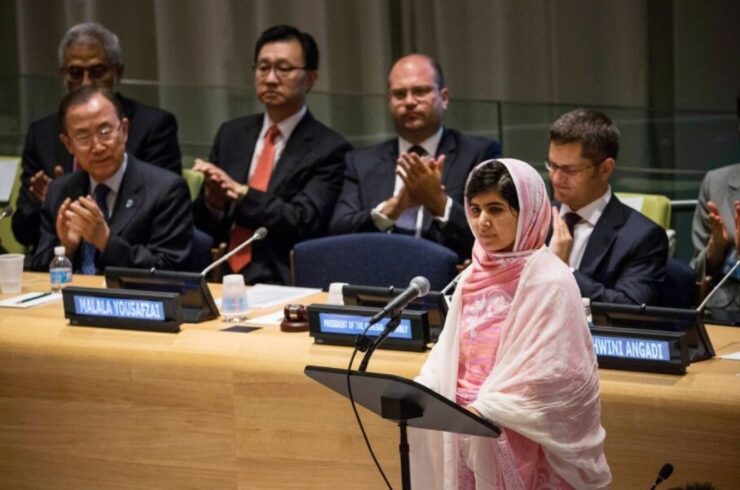 The United Nations estimates that 57 million children of primary school age do not get an education — half of them in countries at a conflict like Syria.

“Students and teachers across our globe are intimidated and harassed, injured, raped, and even killed. Schools are burned, bombed, and destroyed,” said Diya Nijhowne, director of the Global Coalition to Protect Education from Attack.

Gunmen from the Boko Haram Islamist group — whose name literally means “Western education is a sin” — broke into a secondary boarding school and killed 41 students and one teacher before setting fire to the building.

According to Ban’s annual report on children and conflict, 115 schools were attacked last year in Mali, 321 in the occupied Palestinian territory, 167 in Afghanistan and 165 in Yemen.

Pakistan has an estimated five million children out of school and Nigeria 10 million, according to UN estimates. 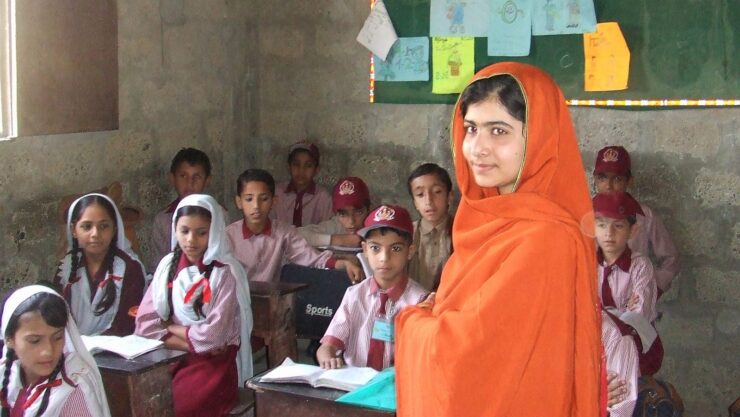 Thank you to every person who has prayed for my fast recovery and a new life. I cannot believe how much love people have shown me. I have received thousands of good wish cards and gifts from all over the world. Thank you to all of them. Thank you to the children whose innocent words encouraged me. Thank you to my elders whose prayers strengthened me.

Dear brothers and sisters, do remember one thing. Malala day is not my day. Today is the day of every woman, every boy and every girl who have raised their voice for their rights. I speak – not for myself, but for all girls and boys.

Dear friends, on October 9, 2012, the Taliban shot me on the left side of my forehead. They shot my friends too. They thought that the bullets would silence us. But they failed. And then, out of that silence came thousands of voices. The terrorists thought that they would change our aims and stop our ambitions but nothing changed in my life except this: Weakness, fear and hopelessness died. Strength, power and courage were born. I am the same Malala. My ambitions are the same. My hopes are the same. My dreams are the same.

Dear sisters and brothers, I am not against anyone. Neither am I here to speak in terms of personal revenge against the Taliban or any other terrorist group. I am here to speak up for the right of education of every child. I want education for the sons and the daughters of all the extremists especially the Taliban.

I do not even hate the Talib who shot me. Even if there is a gun in my hand and he stands in front of me. I would not shoot him. This is the compassion that I have learned from Muhammad-the prophet of mercy, Jesus Christ and Lord Buddha. This is the legacy of change that I have inherited from Martin Luther King, Nelson Mandela and Muhammad Ali Jinnah. 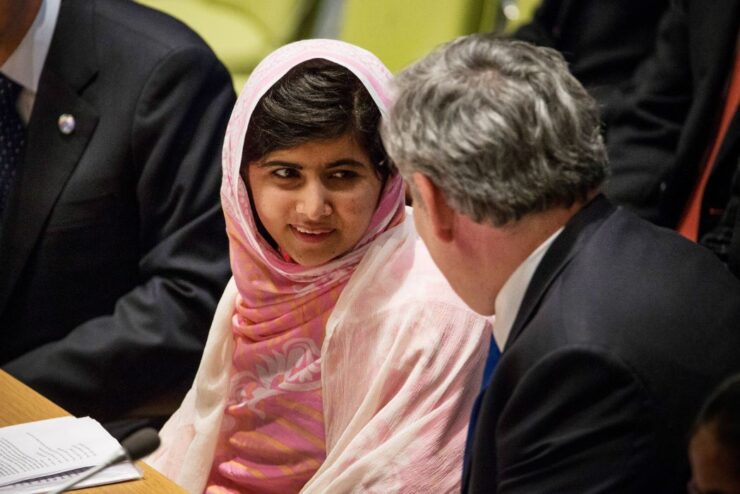 That is why they are blasting schools every day. Because they were and they are afraid of change, afraid of the equality that we will bring into our society.

They think that God is a tiny, little conservative being who would send girls to the hell just because of going to school. The terrorists are misusing the name of Islam and Pashtun society for their own personal benefits.

Women and children are suffering in many parts of the world in many ways. In India, innocent and poor children are victims of child labor. Many schools have been destroyed in Nigeria. People in Afghanistan have been affected by the hurdles of extremism for decades.

We call upon the world leaders that all the peace deals must protect women and children’s rights. A deal that goes against the dignity of women and their rights is unacceptable.

We call upon all governments to ensure free compulsory education for every child all over the world.

We call upon all governments to fight against terrorism and violence, to protect children from brutality and harm.

So let us wage a global struggle against illiteracy, poverty and terrorism and let us pick up our books and pens. They are our most powerful weapons.

One child, one teacher, one pen and one book can change the world. Education is the only solution. Education first.