This Tunisian-French artist with a vivid passion for street art wants to make people question themselves, create human connections and revive their heritage.

eL Seed was born and raised in suburban Paris to Tunisian parents. He started spraypainting in the 90s, as form of self-exploration of his multiple identities and heritage. With hip-hop, graffiti and Arabic calligraphy as his focal interests, it is perhaps no surprise that these culminated in the creation of calligraffiti: street art that blends graffiti techniques and Arabic calligraphy. 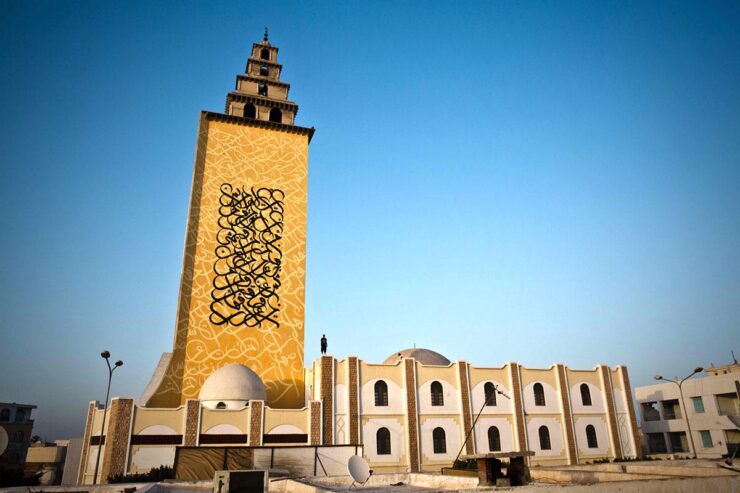 Having given a recent TEDtalk (see below) on the positive potential of street art, he is acutely aware of the impact that art can have for social change. While his calligraffiti pieces are visually remarkable, they also always feature a phrase, a few lines of poetry or a meaningful quote aimed to make a social impact. For example, in 2011 he painted a calligraffiti stating “This is just a phrase in Arabic” in Arabic in Los Angeles. This piece intended for viewers to challenge their own negative perceptions and associations of Islam with extremism.

In 2012 he had the chance to paint the minaret of Jara mosque in Gabès, his hometown – an immensely challenging endeavour that was detailed in the documentary film Tacapes, released the following year. In the wake of violence done to historical sites by religious extremists post-Tunisian revolution, eL Seed selected a verse from the Qur’an that deals with tolerance (49:13) to paint on the minaret. 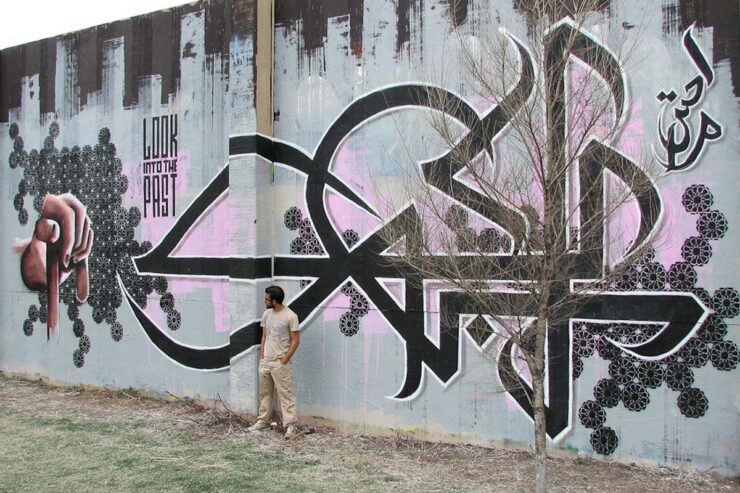 It seems that he’s always in the middle of one project or another, or juggling several at once. He constantly tries to push his creative boundaries because the challenge is a strong motivating factor for him. He was the first Arab artist to be approached by Louis Vuitton to create a design for a scarf, which he adorned with a few lines of Arab poetry. Most recently, a month of travelling across Tunisia and painting abandoned walls was documented in a book, published earlier this year.

At this year’s MOCAfest, part of the 11th World Islamic Economic Forum held in Kuala Lumpur from November 3–5, 2015, eL Seed will be sharing his calligraffiti expertise in a workshop together with British graphic artist Ruh al-Alam. 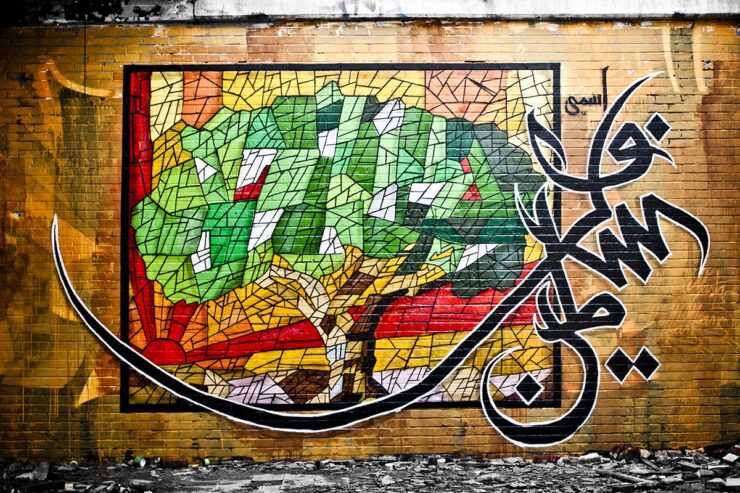 Aquila Style: You recently published your first book Lost Walls, which you describe as a ‘personal journey across [your] motherland’. What was the most important thing you learned about your identity/identities through this project?

eL Seed: I knew Tunisia, but through Lost Walls I discovered a lot of things I didn’t know. The goal at the beginning was to have other people discover Tunisia, but it actually was me discovering it too. It made me realise the beauty and depth of my own heritage and history.

I discovered the struggles of some of my people in some of the most neglected parts of Tunisia. This whole journey transformed me, as I feel more connected to my country and I want to develop more projects there. 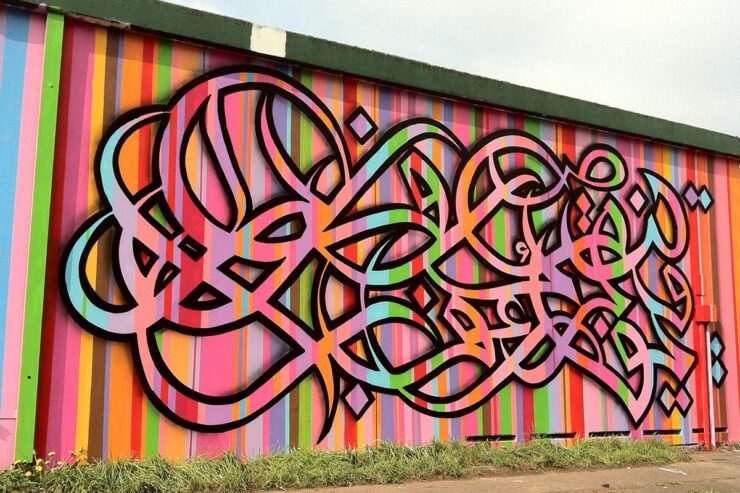 What are some of the challenges you face in your work?

The challenges always depending on the place I am painting. I don’t use stencils or projector so the biggest challenge is always the first letter that I trace, as it gives the balance and rhythm to the rest of the piece.

MOCAfest is all about bringing artists from diverse backgrounds together and your calligraffiti exemplifies collaboration. 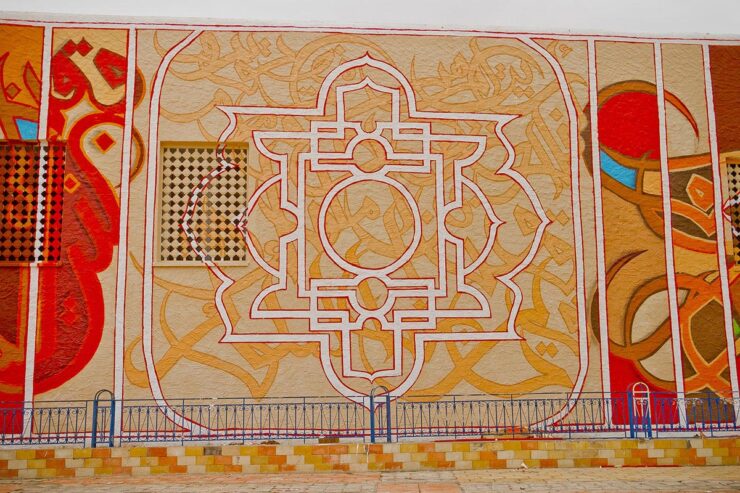 What are some of your most memorable experiences of working together with other artists?

I have done different collaborations with street artists such as HEST, Zepha, Ruben Sanchez. Mixing ideas, styles and artistic approaches is something I aim for. I am open to collaborate with artists from different fields such as musicians, dancers or moviemakers and explore how my work can be expanded to different mediums. It is inspiring.

The most memorable collaboration is one I did with the French brand Louis Vuitton [for their Foulards d’Artistes project]. When Louis Vuitton approached me, I found the proposal really interesting: bringing the spirit of the streets into a luxury brand. I saw it as an opportunity to create a clash but it turned out to be the contrary. I tried to look for two different worlds, particularly the separation of East and West – [although this is] a disconnection I don’t believe in. 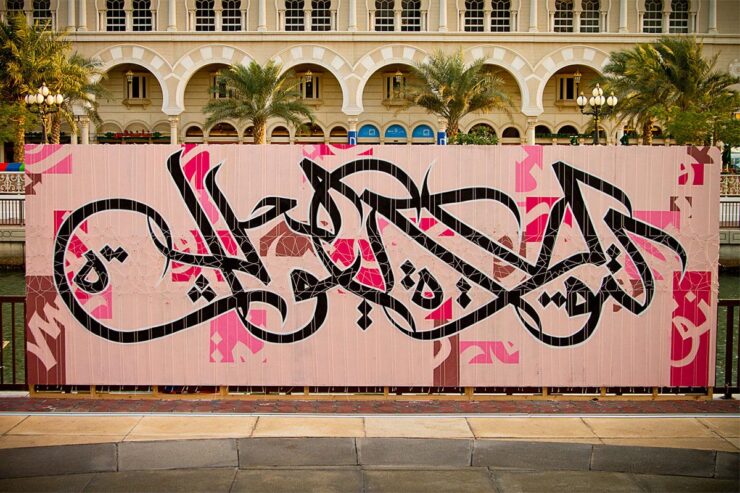 I wanted to use this scarf as a way to show people that these ‘clashing’ worlds are not actually contradictory. Venice was the perfect example, especially as not many people know this part of history. In the 12th century, despite being forbidden from all trade activity with the Arabs by the Pope, the Venetians refused and went against the ruling power, by selling weapons and wood to the Arabs.

I expressed the values of tolerance, acceptance and unity with a visual revival of the poem, “Venice Carnival” recounted by Taha Mohammad Ali. By using this poem, I wanted to pay homage to the city of Venice. 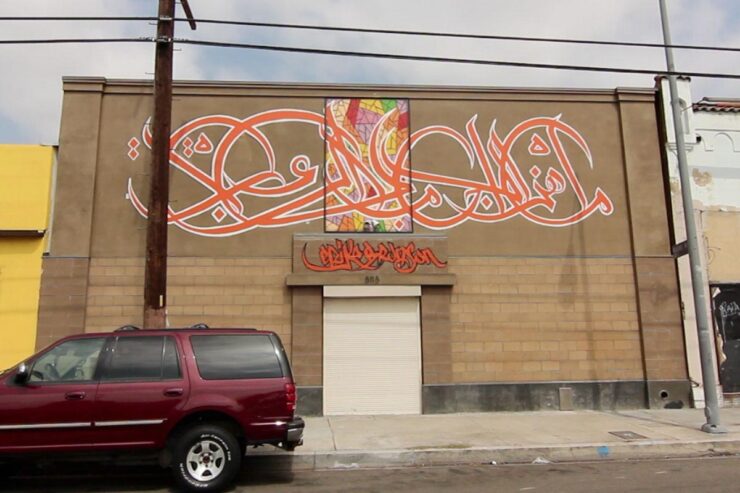 What are you looking forward to learning at the festival?

I hope to learn more about Jawi script and learn from people’s experiences. It is all about human experiences. I use my art as a pretext to meet people. It is always easy to open a conversation with a stranger when you talk about art or culture.

Which of your projects are you most excited about right now?

I always stay discreet about my upcoming projects. I am working right now on a new project that I hope to achieve before the end of the year. Stay tuned. 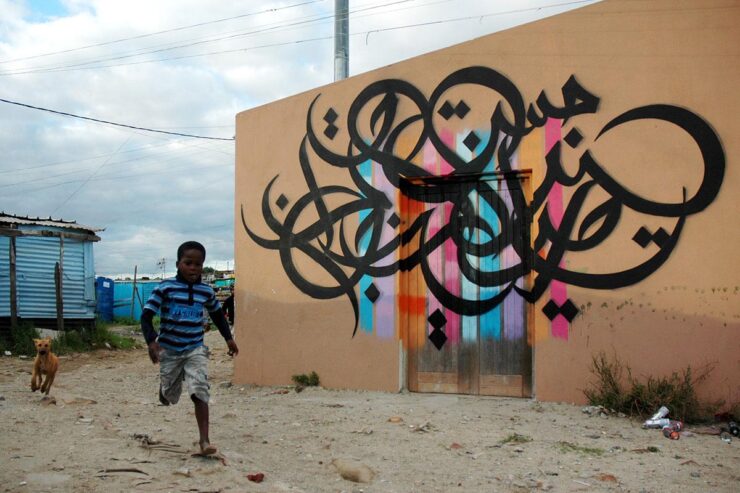 Which groups do you feel that you give a voice with your art?

I don’t represent anybody in particular, I believe. I am just trying to be an ambassador of my culture through my art. Opening conversation is what brings understanding between people – this is the goal of my artwork. Talking about issues, opening debates with respect and with consideration for everyone.

I believe that I am part of this amazing movement that many call an ‘Islamic Art Renaissance’. Graffiti is relevant to our times and generations. The fact that Arabic calligraphy is bring revived through graffiti gives calligraphy a new breath and allows it to reach new audiences. In a new way, it helps preserve a heritage. 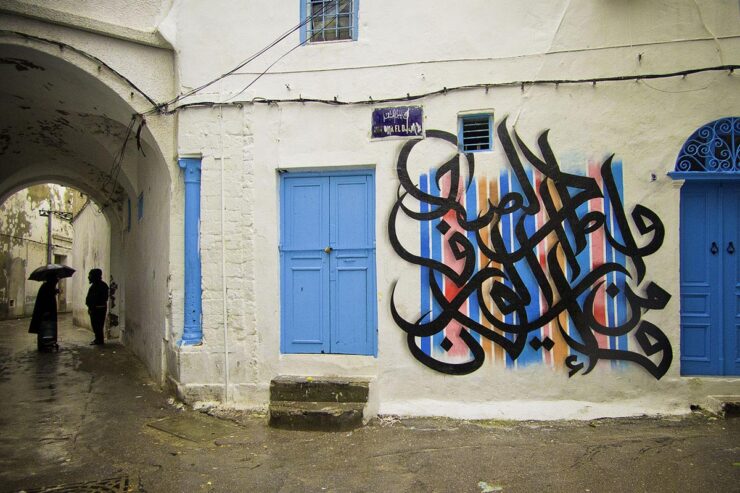 I hope more and more young artists will take onto their culture and history to create artwork that shows the beauty and the diversity of their community.

MOCAfest 2015: Brushing up on calligraphy with Ruh...