In a guest article, Fatima Fakier reports on the cultural and religious influences at play in this often divisive issue and examines the consequences of increased segregation.

The human body was designed for physical activity. Our bodies are perfectly engineered to fulfil our basic needs and to achieve what we set out to do.

Regular exercise stimulates a multitude of networks within our bodies, which benefits all our inner processes from immune-system function to emotional balance. Aside from weight loss, beating depression and combating PMS, women who exercise regularly or play sports tend to have a better body image regardless of their actual shape or size.

Muslim women face many barriers to sports and exercise, such as hijab bans, large-scale poverty and religious intolerance. But one of the biggest barriers originates from within their own communities.

The belief that women’s participation in sport and exercise in public is unacceptable stems from the desire to protect men as well as women’s modesty. In a recent discussion I had over women’s football, one woman argued that running and jumping in front of men jeopardises a woman’s dignity and that such movements expose too much of a woman’s body. 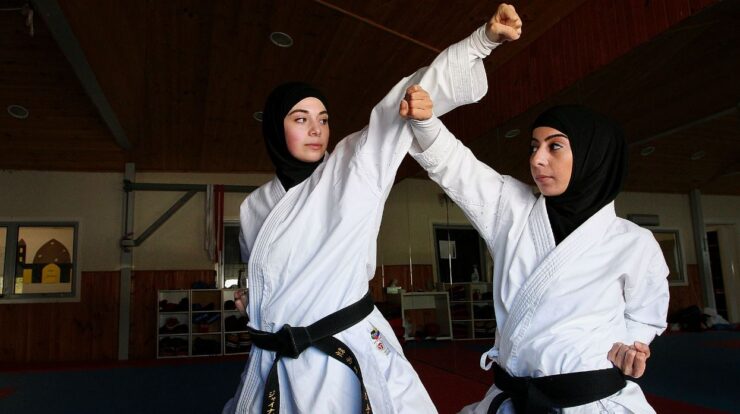 But this is a topic over which opinions are greatly divided. To get further insight into the debate, I decide to interview a number of Muslim women from around the world.

Ruqayya, a young teenager living in America, wears the hijab and plays basketball. She sees nothing wrong with doing athletic activities outside if one observes hijab.

Kulsoom Abdullah, 37, is an American weightlifter well-known for her successful campaign against the hijab ban in her sport. She feels that dress codes should not be forced on anyone. ‘I don’t think women should be forced to dress a certain way; I don’t want women to not have the chance to experience competition and the fun of sports.’

Stephanie, an American and 21, is into rock climbing. Sarah, 23 and from the UK, enjoys the crazy sport of roller-derby. Thirty-six-year-old Rania from Indonesia swims and cycles. All take advantage of the fresh outdoor air to do their sports, and they do it in hijab. 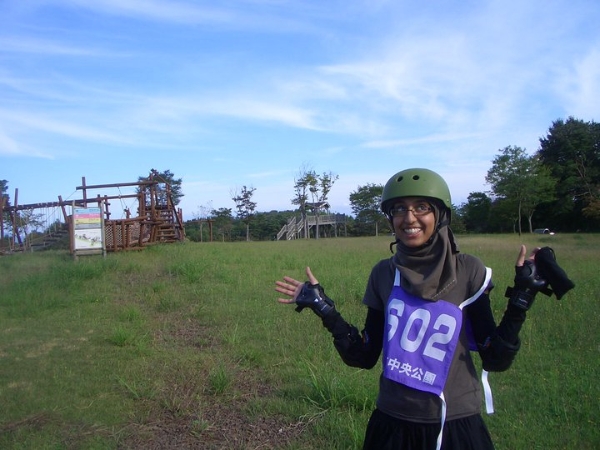 Mumtaz, who is 35 and lives in Botswana, has a slightly different view. While she is active in sport, she takes extra care to do it in an all-ladies group or with her husband. She also cycles outdoors in modest attire. But she feels unsure about women competing in stadiums in front of mixed-gender crowds. As she points out, ‘I don’t think this is the intention of women in sport (in Islam).’

It seems that while everyone I spoke with recognises the need for sport and exercise, differences in opinion exist over what is appropriate. Some say that women should be allowed to exercise only behind closed doors. Others maintain that women may exercise outdoors in proper Islamic dress, but not in front of thousands of men. A third group believes that women can play sports and exercise outdoors or in a stadium, provided they observe Islamic dress codes. 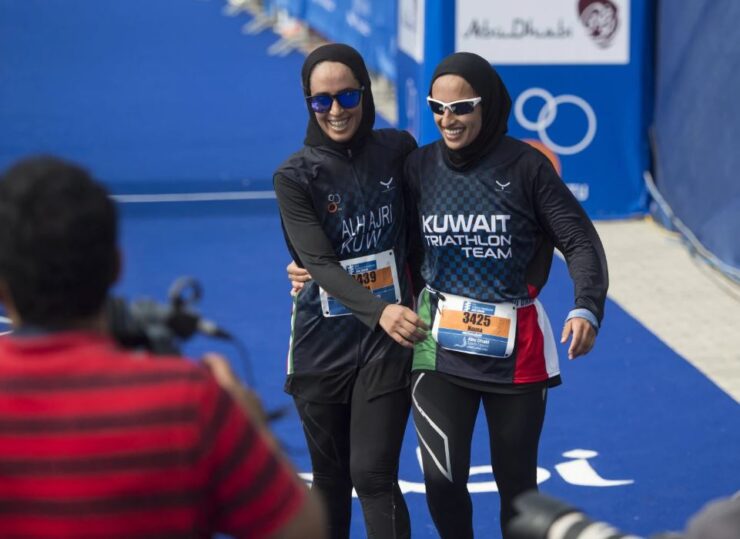 I believe that though cultural perspectives should not override Islamic thought, this is the reason for the different views on what is appropriate.

The basis of Islamic thought and practice comes from the Qur’an and hadith. It seems that differences in the interpretation of these two sources of evidence are where these differences in opinion originate, with interpretations possibly influenced by place of origin or residence.

I gave the women I interviewed a scenario to consider. In it, a Muslim woman in loose clothing and hijab rides a scooter. They unanimously agreed that in countries where scooters are common this would not raise any eyebrows. They also concurred that this scenario would likely be considered unacceptable by those in countries with few scooters. My interviewees agreed that culture often plays a major role when it comes to social standards within a Muslim community.

Of course, if Muslim women’s public participation in sport and exercise were made unlawful in countries that currently allow it, repercussions would follow. Many activities we take for granted that are acceptable under Islam, such as walking, cycling or swimming in the sea, would become impermissible. 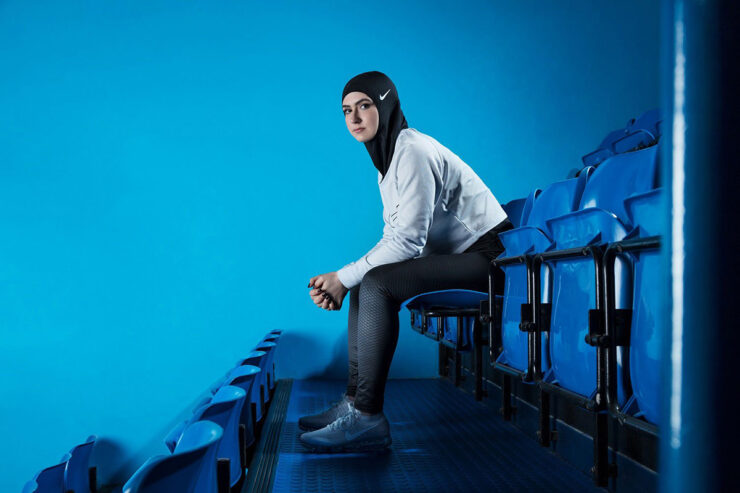 Implementing such a law would bring the complete segregation of men and women, depriving married couples and families from the opportunity to bond through sport. A husband and wife would not be able to play tennis together because neither would be allowed into each other’s gender-segregated facilities. Community fun-walks would be out of the question.

Restricting women to indoor environments to exercise or play sports poses numerous problems and severely limits their options. Women must purchase gym equipment or membership to a female-only gym. And since free or government-subsidised female-only sports facilities tend to be sub-standard, those serious about their exercise might feel compelled to pay more or even forced to abandon their activity.

Interestingly, a specific hadith of Prophet Muhammad (pbuh) racing in the desert with his wife Aisha is used by both sides to support their argument for why women should or shouldn’t be allowed to exercise in public. That same hadith is also used to show the playful intimacy that should exist in a Muslim marriage, a bond that the hadith illustrates clearly.

Less clear, however, is how this hadith prohibits women from participating in sport in public. The limits are poorly defined. It seems that where the lines are unclear people naturally fall back to what they are familiar with – in this case their culture and traditions. But just because something is culturally unacceptable, it doesn’t necessarily make it un-Islamic.

Islam is a simple, natural religion that encourages a lifestyle accessible to all, regardless of any man-made standards. Walking a few miles on God’s given Earth is the simplest form of exercise. Being active in the fresh air and sunlight is healthy. Outdoor scenery can provide a motivating boost not found in gyms. 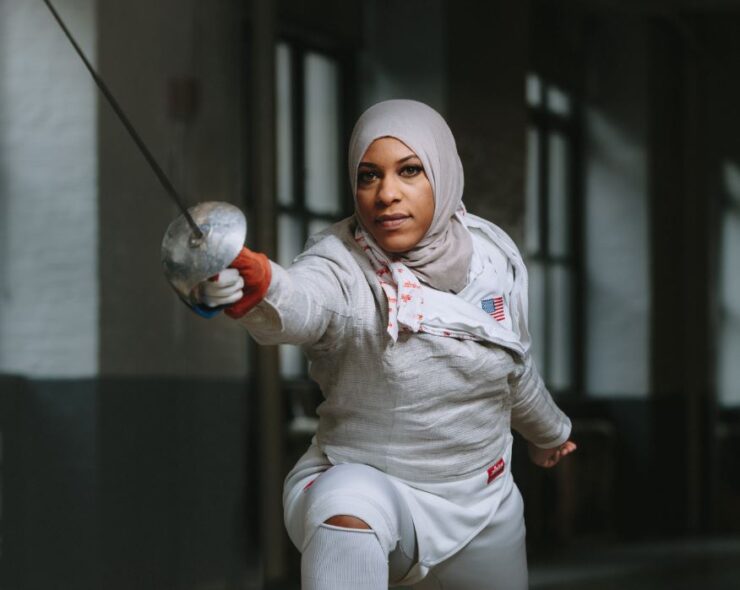 When women become professional athletes and compete in the sports arena the issue of being seen by thousands of men is irrelevant. After all, Islamic modesty applies whether one man is seated in the stands or thousands are watching on TV. To me, there is no difference between a woman playing sport, making a speech on TV, walking in a crowded shopping mall or cycling in a local race. The women are there to compete using their natural talents. Adding a television camera should make no difference to their modesty.

In truth we should welcome it, for it will help amplify the hijab and the Islamic voice in the world. It will give Muslim girls role models to look up to. It will promote religious tolerance and understanding and may remove other barriers to Muslim women in sport.

As for the notion that kicking a football exposes a woman’s body, when I watch football it is only the swinging ponytails that seem to distinguish the men from the women on the pitch. Women wear the same loose kit as men, and often it takes close inspection of the players’ facial features to establish whether it is a men’s or women’s match.

While there may exist a lack of clarity on this topic, the requirements of modesty in Islam are very clear. There are dress codes for both men and women, and behaviour is defined by good manners. Beyond that, women playing sports in public remains a topic open to discussion.

Fatima Fakier is the founder of friniggi Sportswear, a company specialising in performance sportswear for Muslim women. For more information, visit their website or Facebook page