RIYADH, September 15, 2013 (AFP) – Saudi Arabia, where cinemas are banned, is to compete for an Oscar for the first time next year with feminist film “Wadjda” directed by Haifaa al-Mansour, a Saudi official announced Sunday.

The movie tells of a young girl’s quest to own a bicycle in the ultra-conservative Muslim kingdom where women are deprived of many rights, among them driving.

“Wadjda will represent Saudi Arabia at the Oscars, competing for the best foreign-language film, in a first for the kingdom,” Sultan al-Bazie, who heads the Saudi Arabian Society for Culture and Arts, told AFP.

The decision follows “the success which the film and its director have achieved at several international festivals,” he said.

Directed by Saudi Arabia’s first female filmmaker and shot entirely in the Gulf state, the film won best Arabic feature award at the Dubai Film Festival last year and picked up an award in Cannes in March.

“Wadjda” was co-produced by Germany’s Razor Film and several Saudi companies, including Rotana Studios which is linked to a member of the royal family.

But the film, first released in France, will only be seen in the kingdom on DVD or on television. 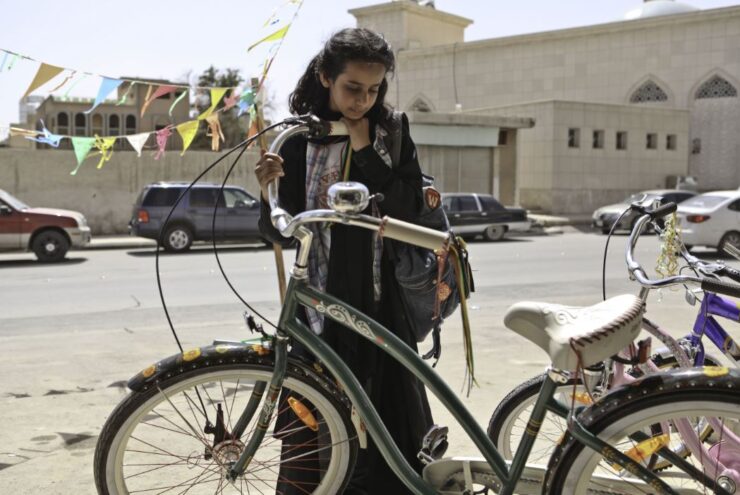 Mansour has said she was forced to direct what is her first feature film from a van with a walkie-talkie in some of the more conservative districts where she could not be seen in public together with the male crew and cast members.

Women in Saudi Arabia cannot travel abroad or appear without a guardian in public places where males and females mix.

The kingdom remains the only country where women are banned from driving. They must also cover from head to toe when in public, among other restrictions.

In April, local media reported that religious authorities have allowed Saudi women to cycle on condition that a male relative or guardian is present with them while they ride.

They must also wear a long traditional black abaya cloak.