By Rana MOUSSAOUI – Protesters took to the streets of Beirut Saturday on International Women’s Day to demand better protection for women amid an uproar over husbands murdering their wives. The march by some 4,000 women, men and children from the National Museum to the Palace of Justice, was led by mothers and other relatives of women they said had been the victims of domestic violence.

Urging parliament to adopt a bill that would set prison terms of up to 25 years with forced labor for men convicted of murdering a female relative, many women wept as they walked. The bill, which has languished after being approved by a parliamentary committee last year, would also create a specialized police agency to deal with abuse and permit women to seek civil damages in abuse cases. 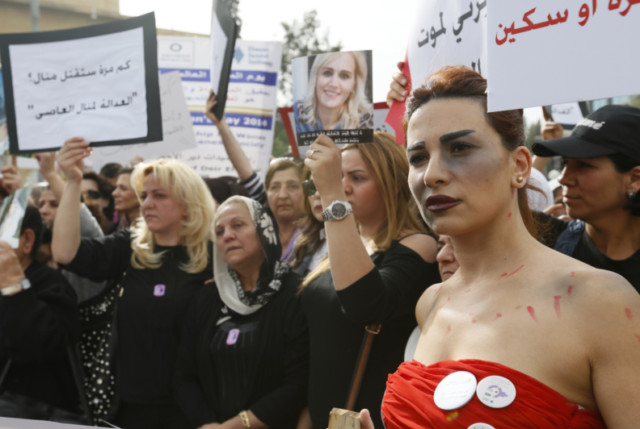 As marchers shouted “The people want the bill to be ratified”, some carried posters reading “Break the silence”, “We say no to abuse, do you?” and “Speak out. Stop domestic violence.”

Lebanon is viewed as one of the Middle East’s most liberal countries, but no law protects women from abuse or violence by their fathers, husbands or brothers. However, one law does save rapists from punishment if they marry their victims. Meanwhile, women who marry non-Lebanese men are barred from passing their nationality on to their children, and husbands are allowed to confiscate their wives’ passports to prevent them from traveling.

Women who do contact the police for help in domestic violence cases are often laughed at. In mid-February, Christelle Abu Shakra died after ingesting insecticide. Her mother pressed charges against her daughter’s husband.

Earlier the same month, rights groups said Manal Assi died after her husband beat her with a pressure cooker. Last July, Rola Yaacub was found unconscious in her home in north Lebanon. She died later in hospital.

Her family has told journalists they are convinced her husband beat her to death, but the courts said there was insufficient evidence against him. 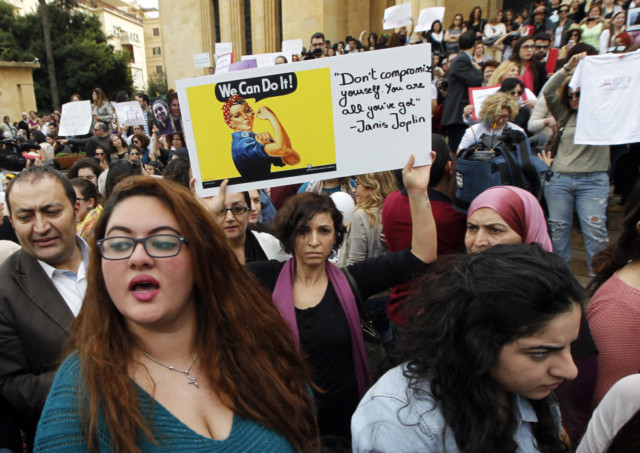 Zoya Rouhana, director of KAFA (Enough), a leading women’s rights group in Lebanon, said: “the fact victims’ relatives are starting to talk about these crimes means that the consciousness that one must not be silent is growing”.

“The media are also playing an increasingly important role, and as a whole, awareness is growing in Lebanon on issues concerning women’s rights and the fight against domestic violence,” she told AFP. Protesters also chanted slogans criticizing judges and forensic specialists whom they accused of falsifying reports on recent murders.

And rights activists accuse politicians of complicity with religious leaders, who have publicly opposed the passing of a law criminalizing domestic violence in all forms including marital rape. In 2011, Lebanon’s highest Sunni Muslim authority described the bill as “heresy”, saying it would lead to the demise “of the family as in the West”.