To die for? How throwaway fashion is costing lives

The latest apparel factory disaster casts the spotlight on not only corporate social responsibility but also the end users: us. By Arwa Aburawa.

‘O you who have believed, do not consume one another’s wealth unjustly but only [in lawful] business by mutual consent. And do not kill yourselves [or one another]. Indeed, Allah is to you ever Merciful.’ – An-Nisa’ (4:29)

On 24 April 2013, the Rana Plaza garment factory outside Dhaka, Bangladesh collapsed. The crush of the eight-story building killed at least 1,129 workers, many of them young Muslim women. They died because the breakneck pace of the fashion industry means that buildings all over Bangladesh are being turned into unsafe makeshift factories which house thousands of poorly-paid workers.

Labour organizations and campaigners warned companies that the buildings were death traps; that there were no fire extinguishers; that fire exits were blocked; and that they were structurally unsound and often built illegally. No one listened. The disaster is now known as the worst industrial accident since the Bhopal gas leak of 1984. It’s also a moment in history which the fashion industry can’t sweep under its red carpet.

Every day in Dhaka, Bangladeshi women stream through the streets on their way to work. It’s a rather unusual sight in an otherwise traditional Muslim country, but it’s one that is increasingly commonplace. Bangladesh has about 5,000 garment factories employing over 3 million workers, the majority of whom are young women. Most of these women have left their homes and families in villages to find work. Along with being poorly paid, they often live in sub-standard housing and endure unsafe working conditions. 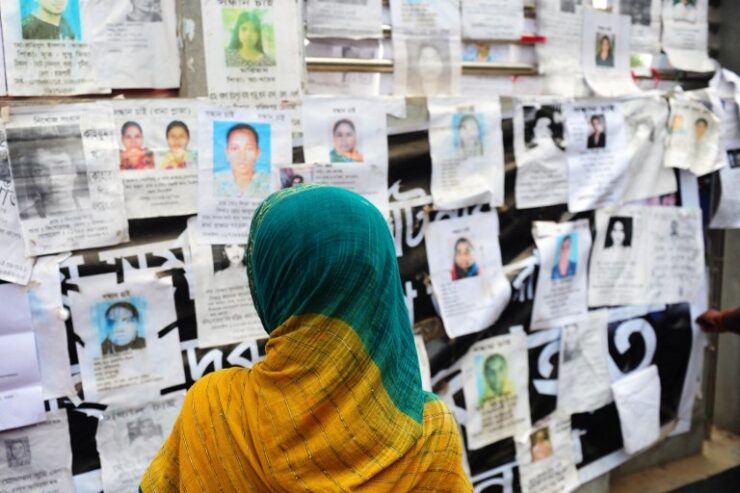 A 2012 report by the Clean Clothes Campaign, Hazardous workplaces: Making the Bangladeshi Garment industry safe, warned that ‘the conversions of other buildings into garment factories, has… result[ed] in widespread safety problems including faulty electrical circuits, unstable buildings, inadequate escape routes and unsafe equipment.’ But the garment industry is booming, and so more and more women are finding themselves on these dangerous factory floors.

We need to ask ourselves – how are these clothes so cheap? Who is losing money?

The industry forms a major part of Bangladesh’s economy, making up the lion’s share of all exports. In 2011 apparel accounted for 78 percent of the country’s $23 billion in exports. And yet, Bangladeshi workers are the lowest paid in the entire world, earning an average of just US$1.50 a day (approximately $0.32 an hour). The average female factory worker in the country is 19 and unmarried with little education or training. As such, she is an easy target for exploitation.

In 2011 War on Want, an anti-poverty charity interviewed 988 Bangladeshi women working in garment factories. The resulting report, Stitched Up: Women workers in the Bangladeshi garment sector, details the extent of abuse in the industry:

It would seem that although entering the workforce has helped some women to escape the rural poverty trap, they have fallen prey to a different kind of exploitation.

‘The only reason exploitation occurs on this scale is due to consumer demand. We demand more clothes and cheaper clothes,’ explains Sadia Kidwai from MADE in Europe, a Muslim-led social justice group. ‘We need to ask ourselves: how are these clothes so cheap? Who is losing money? Not us, and certainly not the giant multinational companies either…’

The Qur’an commands Muslims: ‘And O my people, give full measure and weight in justice and do not deprive the people of their due and do not commit abuse on the earth, spreading corruption (11:85)’. For Sadia, this means ensuring that the people who produce her clothes are treated justly and paid their full measure. ‘Knowing the exploitation that exists within this industry, I could no longer consciously buy my clothes from such sources,’ adds Sadia, who has decided to boycott errant fashion retailers.

‘The incident [in Bangladesh] highlights the worst of human nature where greed and the pursuit of profit take precedence over human life,’ she continues. ‘And unfortunately, each and every one of us who directly or indirectly supports the multinationals at the heart of this crisis has to bear some responsibility.’ 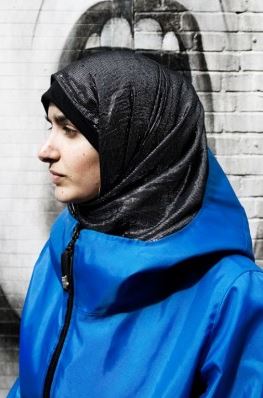 It was this very dilemma that Muslim designer Sarah Elenany had to grapple with when she contemplated joining the world of fashion. How can Muslim support such an exploitative industry? Rather than a boycott, however, Sarah decided it would be best to start her own ethical clothing line, Elenany. ‘It was an Islamic choice really because Islam is all about fairness. Those people working in the factories of Bangladesh are our brothers and sisters – they’re our family and we can’t treat them the way we do. You can’t make loads of money off the hard work of someone else – that’s not fair or Islamic.’

Sarah now has a small shop in the heart of London and has designed ethical clothes for the Girl Scouts as well as a fashion line for women. Even so, she is eager for women to opt out of what she terms ‘fast fashion’ and embrace their own personal style. ‘Don’t buy things that are on trend because you’re only going to wear them for three months and then you’ll need to buy more clothes,’ she says. ‘If you’re not going to buy from ethical suppliers, then at least make sure you are not supporting throwaway fashion. Buy well-made pieces that you know you are going to wear for years to come. Once we start buying more than we actually need, we become guilty of pushing low-cost labor…’

The Palestinian-Egyptian designer was also keen to point out that a change in our personal shopping behavior alone isn’t enough. ‘Without political action, campaigning and actively talking about this issue, nothing will really change,’ she adds. 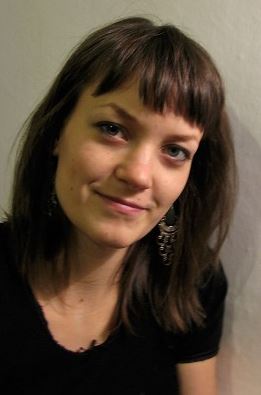 Ethical-fashion expert Bryony Moore, a researcher at Ethical Consumer, a not-for-profit UK-based advocacy group, agrees. She says the single most important thing that can be done for garment workers is to give them the means to influence their own working conditions. ‘Pressurising brands to ensure trade unions are allowed in the factories they source from could make a big difference to working conditions,’ she explains. The disregard for the safety of the workers is something the local unions are trying to address through the ‘Bangladesh Fire and Building Safety Agreement’. This agreement includes independent inspections of supplier factories, public reporting, mandatory repairs and worker-led safety committees and training.

In March 2013, only a month before the collapse of Rana Plaza, the Clean Clothes Campaign asked all major international buyers to sign up to an agreement that would ensure the safety of the workers supplying their products. The response was limited. But since the disaster, brands including Zara, Primark, H&M, Mango, Benetton and many others have signed the agreement. ‘There is still a long way to go but it’s important to recognize the progress made, and the impact that consumers can have on influencing companies’ behavior,’ says Bryony.

There is clearly still a long way to go before ethical fashion is the norm. Many still see it as irrelevant, or a luxury – something that would be nice to have but isn’t realistically achievable. Maybe they’re right; maybe it is too hard. How are we supposed to influence huge corporations? How do we make sure that workers all over the world, in complex supply chains – from those handling the raw materials to those with the final product – are paid fairly and have a safe working environment? As news of two more factory collapses emerges from Cambodia, I can’t help but think that we should at least try.

Six Tips For The Ethical Consumer

Bryony Moore of Ethical Consumer shares six of her tips for buying with a conscience.

Because of the way the clothing supply chain works, brands tend to source from the same factories, so it’s not easy to differentiate between brands as far as labor standards are concerned… designer brands are actually far behind the high street in terms of having decent workers’ rights policies in place.

I would like to challenge everyone to buy less clothing – most of us buy far more than we actually need… If we bought half as many garments but spent twice as much on them, we could buy from genuinely ethical brands.

Take it to social media

Switching to ethical fashion brands is good. It would be better still to email, Tweet or Facebook the mainstream brands to tell them you’re switching and why.

Small is the new fabulous

Generally, buying from genuinely small brands is better – companies that have a small supply chain will generally have a better and longer-term relationship with their suppliers. Small ethical fashion brands often work directly with artisans, making their work better paid and appreciated. Without the anonymity of larger brands, it is harder to ignore the plight of garment workers.

Get friendly with Fairtrade

Look for garments made with Fairtrade and organic cotton, which at least means that part of the supply chain is being scrutinized. Buy local, then you can have a face-to-face conversation with the owner about where their clothes are made.

The widespread media attention on the Rana Plaza in Bangladesh, coupled with the resultant actions of campaigners and consumers, has pushed things in the right direction.

This article originally appeared in the June 2013 Family issue of Aquila Style magazine.